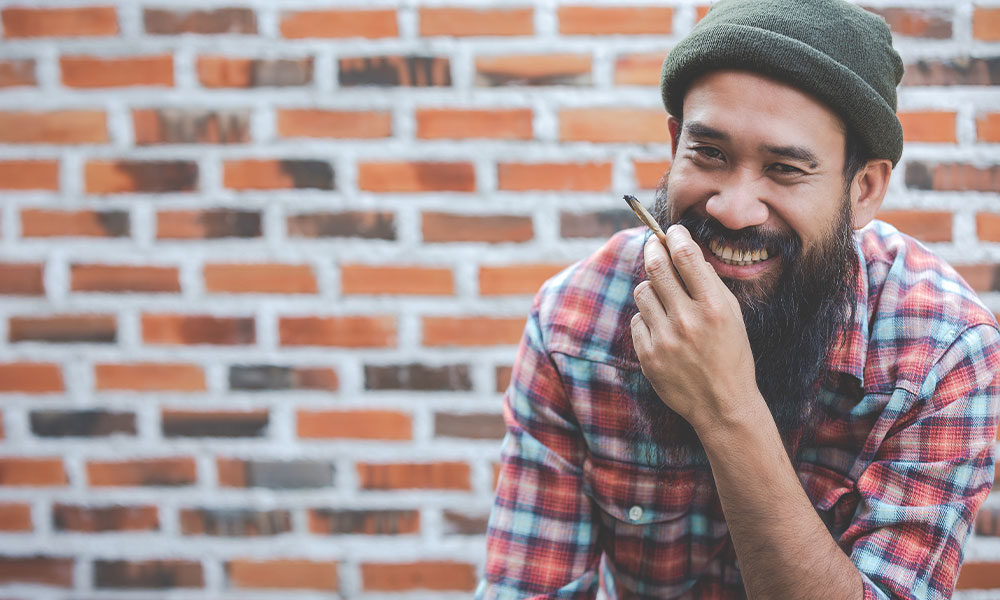 With marijuana becoming legal in more and more states, the question has to be asked: Can we smoke cannabis at work? Smoke breaks are part of the regular pattern of Solonje Burnett’s workday, though where workers at an Amazon warehouse or a downtown office tower might look forward to state-mandated ten-minute pauses every few hours for coffee or cigarettes (or both), Burnett punctuates her day with cannabis. And everything seems to get done just fine.

“I’ve been on a mission to normalize puff (or joint) breaks while at work for years,” says the Brooklyn-based entrepreneur who is co-founder and CEO of Humble Bloom, a cannabis culture agency, as well as the co-founder and Chief Culture & Community Officer of Honeypottt, a cannabis-focused discounts and promotions management app. For Burnett, who stays plenty busy, cannabis is a key part of that productivity—just as much as updating her LinkedIn profile, hopping on Zoom meetings and attending networking events.

“Cannabis is the medicine I need to get through juggling the many tasks of a creative entrepreneur,” she says. “It’s a matter of maintaining balance, achieving focus, finding flow and staying in a calm, elevated mindset.”

Though Burnett is self-employed and thus enjoys freedom from the rules that dictate the lives of hourly wage-earning employees, even if she were a worker bee, she has two things going for her. She’s in New York, where the legalization law specifically permits cannabis use wherever tobacco is allowed. And New York also expressly forbids employers from taking action against an employee for off-duty cannabis use.

You can come back from a lunch break reeking of the joint you just stubbed out, and that’s not sufficient cause to fire a worker in the state, observed David C. Holland, a New York City-based defense attorney. Somewhat controversially, New York’s law also has no public-safety exemption—meaning an off-duty firefighter can use cannabis, whereas a subway operator or bus driver, who may be subject to post-accident testing should a mishap happen on the job, might have to think twice. (Cops could too, in theory, though a NYPD brass revoked an earlier order this summer granting cops that right.)

But not everyone else is so lucky as Solonje Burnett or as a New York City firefighter. As two-thirds of Americans live in states where cannabis can be legally possessed and consumed and the debate over criminalization shifts to Congress and the White House, certain key practical considerations remain unaddressed.

These include balancing an employer’s right to create a functional and profitable working environment with employees’ rights to govern their own personal conduct. So, can you smoke cannabis at work?

So-called “first-wave” legalization states such as Colorado and California don’t have the same protections for off-duty cannabis use as New Yorkers. (Cannabis culture is worth only so much.) This was a flaw that legalization advocates noted and addressed in later laws and have had to return to lawmakers to correct in states that legalized first.

In California, a bill protecting workers from termination for off-duty cannabis use in 2024 recently passed the state Legislature and is expected to be signed into law later this month, nothing in any state law in the country allows you to use cannabis during work hours.

Yet, as Burnett and others contacted for this article observed, every workplace in America likely has someone under the influence of cannabis while on the clock.

But what does that mean, anyway? There’s a vast gap between responsible, mindful cannabis use to soothe anxiety or stimulate creativity and visible, disruptive intoxication—yet in workplace culture, the two are often treated as one and the same.

That’s the nature of cannabis drug-testing, where a positive result famously reveals past consumption that may be days or weeks in the rear-view.

Use Weed, Get Fired

The law’s strength has yet to be tested in the courts, but in New York and New Jersey and other states where off-duty use is protected, the only way to get fired for cannabis use is to demonstrate intoxication as well as impaired performance. And that impairment must be clear.

“The odor of weed isn’t enough to get drug tested or disciplined,” said Holland, the New York attorney. “There has to be a clear and articulated observation that the worker isn’t performing up to speed.”

That, however, is also going to lead to problems in the form of lawsuits challenging dismissals, as employers seek to allege that a worker producing 100 widgets a day suddenly slipped to 85 because of cannabis—and attempt to prove it.

“You’re going to see a lot of fabricated claims,” Holland said. But one thing that won’t be tolerated, since it’s not protected, are smoke breaks like Burnett’s. Possession at work and use during work hours aren’t protected acts, so anyone who does like to consume during the day beware.

This weird list of conflicting bullet points—you can’t smoke marijuana on the job or during work hours, though many do; you can’t smoke weed at home in some states and be safe from ramifications after a drug-test, though for many, this will never be an issue—leaves anyone searching or offering practical advice in a bit of bind.

But it also illustrates the incomplete project marijuana legalization remains, even in states where cannabis culture is deeply rooted. Policing cannabis at work is still a technique to control and punish workers.

And given the different standards applied to blue-collar and service-industry workers compared to knowledge economy workers—many of whom are still comfortably working from home, enjoying the privileges granted during the COVID-19 pandemic, which may also include the freedom to indulge in cannabis—there are racial and classist divides at play, too.

Though for now, in the great workplace debates around “quiet quitting” and dragging workers back to the dreary rigors of commutes, cubicles and business-casual, cannabis use hasn’t appeared as a dividing line quite yet.

“I haven’t heard any complaints, post-COVID or otherwise, about office workers being upset that their co-workers are smoking cannabis at work,” said Ellen Komp, the deputy director of California NORML, one of the chief sponsors of the workplace-protections bill currently awaiting Gov. Gavin Newsom’s signature.

This could partially be because employers are still in the process of summoning office workers back into the office—and only some employers at that. Many are content to let their workers remain at home several days out of the week, or all of it, if that’s what it takes to keep their people happy and productive.

As for co-working with cannabis, that’s a cultural shift that’s yet to take root, at least officially. For now, American workers will have to make do with a familiar status quo: uneven and unequal treatment, and some unclear directions under the law, rules and culture still struggling to adjust.

“Employers and co-working spaces need to recognize and release their biases,” Burnett said. “Many of us are already high in the workplace. It’s all about responsible conscious consumption.”