Twitter appears to have ended a federal partnership that had presented users who searched the site for certain drug-related keywords, including “marijuana,” with a suggestion they consider entering drug treatment. No such suggestion had appeared for “alcohol” searches.

Launched in 2020, the feature has been a source of contention for advocates, who’ve criticized the social media company for suggesting that any interest in marijuana is indicative of a potential substance misuse problem. It did not disaggregate searches for policy news and products, for example.

At some point this month, the feature—which was rolled out in concert with the federal Substance Abuse and Mental Health Services Administration (SAMHSA)—was suspended without notice.

It’s possible that an agreement between Twitter and SAMHSA for the search feature expired, or that it was removed amid new site owner Elon Musk’s efforts to pare back various services since taking over the company. Marijuana Moment reached out to Twitter about the timing and reasoning for the change, but a representative was not immediately available.

“Help is available. If you or someone you know is struggling with substance use, you are not alone,” the prior warning said. It directed users to SAMHSA’s help line and website. 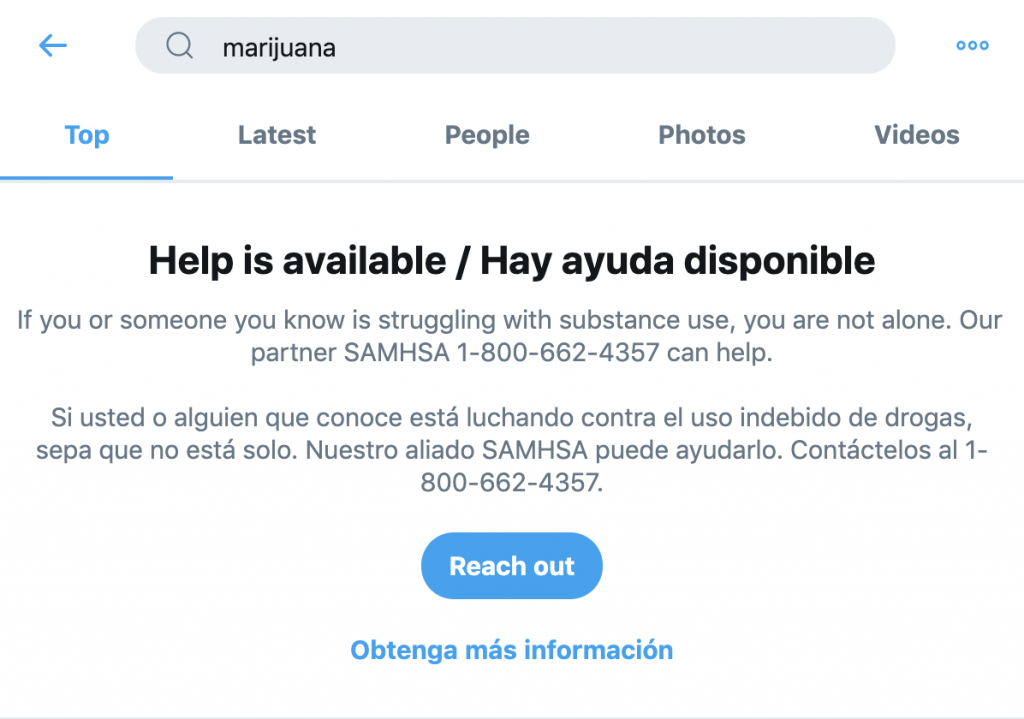 While promoting substance misuse treatment isn’t necessarily problematic on its own, advocates have pushed back about the fact that Twitter chose to peg these notices to marijuana and certain other currently illegal drugs in particular while allowing alcohol search results to be displayed on the platform without a similar warning.

Interestingly, while the SAMHSA treatment resources were flagged for Twitter users who searched for “marijuana,” “cocaine” and “heroin,” searches for “cannabis,” “LSD,” “MDMA,” “psilocybin,” “pills,” “adderall” and other drug-related terms came with no such invitation to consider getting help—further highlighting the arbitrary nature of the past feature on the social media platform.

It’s possible that SAMHSA proactively sought to end the partnership, especially considering that the head of the U.S. Department of Health and Human Services (HHS), which the agency falls under, has been taking to Twitter in recent weeks to discuss federal marijuana policy—including more than one tweet posted at precisely 4:20 PM.

A SAMHSA did not immediately respond to a request for comment.